It's that time of the month again...no, not me in a bad mood and snapping at everyone and generally feeling fed up with life!!

I mean the time of month when my Bellabox is shipped and delivered by a caring hand to my door.

I absolutely love coming home to see that little pink box sitting on my table.  I take some 'me time' to enjoy each and every beauty-filled moment as I open and unwrap my surprises :-) 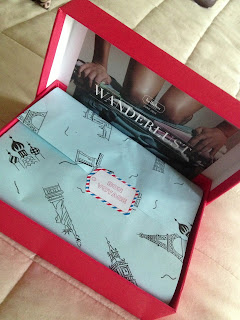 who wouldn't want a beautiful pink Bellabox to arrive into their hands each month!?
...SIGN up to Bellabox Singapore Sign up here and enjoy the beauty-filled experience xx :-)

This Wanderlust edition for June 2013 brought me all of the pictured beauty treats.  Not every box is identical, you will receive a pick and mix of items from the month but each mix will be of equivalent value and quality. 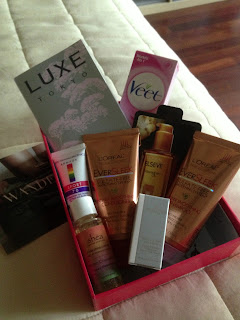 Methode Swiss Tri-Cell Age Delay Face Intense - is going to delay signs of ageing and promises to be so intense you really will see firm, plump and utterly youthful skin.  I like the texture and find the dropper applicator easy to use without being wasteful.  Of course, best results will be seen when used with other Methode Swiss products like the Age Delay Face Cream.

VMV Hypoallergenics Armada Sport 70 - this lightweight sun cream is perfect for the water sports lover and with SPF 70 you can enjoy a beautiful sunny day on the water and keep those UV rays at bay.  I've received Hypoallergenics products from VanityTrove previously (cleanser and moisturizer), I find these so light yet effective, I let my eldest son use them to keep those nasty hormone changing spots at bay.  I know this sun cream will be perfect for him on the Rubgy field or in the swimming pool :-)

Bomb Cosmetics Shower Gel - Olive Oil based shower gels are my fave, totally packed with moisturising goodness.  The scent is amazing, a little fruity and rather invigorating too :-)  The gel lathers up loads using a shower puff so a little goes a long way.  Made in England too, so I can't complain. www.shea.com.sg

L'Oreal Paris Hair Expertise - Eversleep Shampoo & Conditioner - so this was my fave from the Bellabox team, my hair is generally a fizzy mess (unless I spend a good hour styling it).  Both the shampoo and conditioner, from the very first use, have had a lasting effect on my hair and sleek hair is once again not just a dream :-)

Veet Hair Removal Cream - I have actually used this Cream before and love the lasting results it gives. So easy to use - I apply, leave for a minute or two before jumping into the shower cubicle and then 'on-ing' the shower, use the handy spatular to scrape off the Cream et voila silky fuzz free legs.  Rinse off fully and slip on your breeziest summer dress :-)  This handy sample size is perfect for a quick beach getaway too.

L'Oreal Paris Extraordinary Oil - lightweight and perfect to keep those sleek locks looking beautiful all day long.  Adds instant shine too.  I use this and some oils are really, well, too oily for my hair and seem to leave my hair just hanging lifelessly but, this is light enough to keep hair's natural movement. 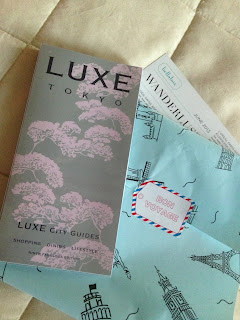 Luxe City Guide - this absolute divine gift totally made me smile.  Each Bellabox subscriber would not have received the same City Guide and I'm happy to say mine was of a City I long to visit and now makes me want to visit Tokyo, like, asap....come on Mr Man let's book a romantic weekend away xx :-)

Can you believe all of the beauty treats in just one box.  J'adore Bellabox xx :-) 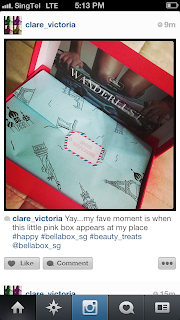 Singapore in 'n' under a smokey haze

WARNING!  I am moaning and groaning about the air quality in Singapore right now (June 2013).

So, Facebook friends and Instagram followers will have seen me generally 'going on' and on, and on about this smokey haze problem we are having here in Singapore right now.

Just as my antibiotics start to kick in and begin to rid me of this germ that has been lingering on my chest...well now, thanks to the Indonesian farmers I'm back to coughing like a 40 a day smoker!!

Apparently, the Indonesian farmers decide to save time and money when preparing their land for the next season's crops by burning down their forests!!  Please, come on someone needs to make them see sense!  It's illegal and they still do it and seem to be getting away with it!!  (This is as far as I can see - I may of course be wrong and their could be a lot of wrist slapping going on in some pristine building somewhere!??!)  :-) 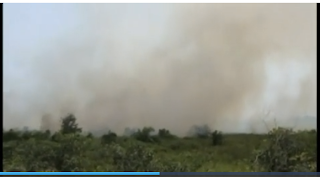 Farmers' land in Indonesia...
intentionally set on fire as a money spinner!! 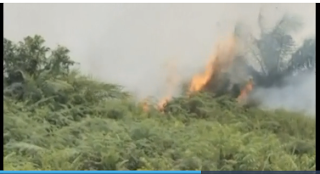 See the video...why is Singapore in 'n' under a smokey haze?


Anyways, it's took this incident of Singapore being in 'n' under a smokey haze for me to learn what a 'PSI' and 'AQI' are.  So the moderate level of PSI 51-100 was soared above on Monday to 150, Tuesday morning I was choking and took to walking Mr Dog whilst wearing a mask (not a soul out and about in my area - rather earily quiet), mid afternoon saw the levels fall back down and I could breath normally (thanks to the lovely breeze on the East), however the city remained in a terrible haze.  Our usually gorgeous view of the city skyline from the balcony was none existent!  Schools were holding recreational activities indoors and kids, the elderly and anyone with lung problems were told to spend as little time outdoors as possible. 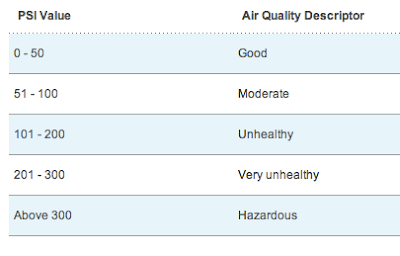 Wednesday morning the PSI reading was high 60's which is good and nothing too bad at all (yay, things are improving).  We talked too soon though and as of 2pm we had reached a PSI of 170+ with an AQI reading of UNHEALTHY. 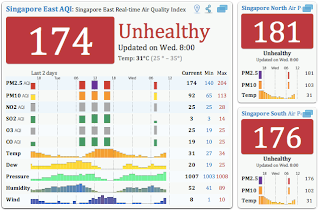 I find it such a concern.  This whole thing has made me totally feel for friends who live in Shanghai and other parts of China - how they live like this as part of their 'China experience' is beyond me!  Should Mr Man's job every take us to live in China I think we would need separate medical for my lungs and more salary for our daily mask wearing needs :-) 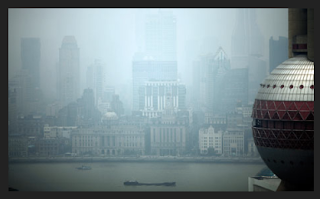 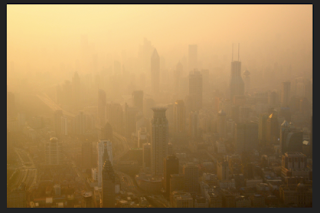 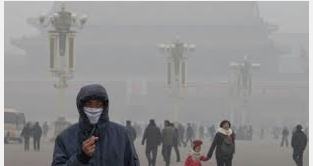 So, check the PSI see what the AQI is telling you and if the outdoors is unhealthy, then do wear a mask or stay indoors where possible.

Just off now to cough up my lungs and take a puff of my Ventolin inhaler...


PS...don't quote me on any of this PSI, AQI and hazy weather 'stuff'...I've done some research but I'm far from an expert - my only qualification to say the air quality in Singapore right now (June 2013) is 'unhealthy', is that my breather is strained and uncomfortable, I feel like I have something stuck in my throat, I'm continually coughing and the whole of Singapore smells exactly like Great Britain in November at the hight of their *Bonfire celebrations :-)

I do believe it is that time of year when kids 'n' parents (especially mums) get really quite tired.

Kids because there's end of the year stuff at school to do and get excited about.

While we mums are a) stressing, b) getting excited ourselves (if the truth be known) and c) trying to remain calm and in control of the whole end of year and summer holiday situation :-)


Around 3 weeks ago I started with a sore throat which gradually turned into a cough and full blown cold (one evening I swear my head was going to explode). 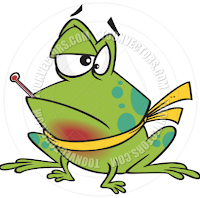 The cold cleared up and I started to feel better (although did have to miss my SPCA shift).  The following week I'm on the MRT, start coughing and low and behold I have an asthma attack (not had one for 7 years!)  Course I panic and decide to go to the doctor, get a Ventolin inhaler and told I most likely have mycoplasma ...   Come out of the doctor with antibiotics and smiling thinking I would rid myself of this germ.

A week later, antibiotics finished and I don't feel ill but so exhausted I wanted to cry :-(  Imagine, the kids are home at 3.30pm and I'm just wanting to close my eyes.  Queue Mr Man coming home from work and I'm off to bed (sleep before 9pm for me!)

I was convinced it was just me and (dare I say it) I felt I was getting old...shock, horror!!  Anyways, after talking to a couple of other mums around my area it seems it's not just me and is a rather common thing that has to be suffered prior to the BIG RELAX during the summer hols/vacation.

I did visit the doctor again this week and came out with another weeks worth of antibiotics and she told me I needed to rest and fight of the germ before I would feel better and the exhaustion is normal it's my body telling me to rest.

So, with the mixture of my germ infested body and the holiday preps this tiredness wasn't helping me 'get well soon'...I need to rest like the doctor ordered.  Hence the blogging has begun again...the sitting quietly and typing until my heart is content is rather therapeutic :-) 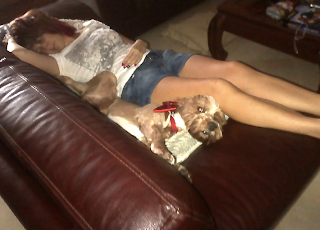 Taking 40 winks with Mr Dog as my companion...
thnx Mr Man for snapping while I sleep! :-)

Resting is all well and good but when the temperature is over 30 degrees (mostly 34-36 degrees) even resting gets pretty darn hot.  So, to kill two birds with one stone and all that (exercise to get up the endorphins, and give energy, give Mr Dog his daily exercise and search out some 'air')  I've took to walking the extra km with Mr Dog and finding ourselves where the Marina Bay Reservoir meets the sea (The Marina Barrage).  Yes, finally we find the sea breeze and enjoy a moment of hair blowing and breathing in the sea air (I'm a true believer that sea air is good for the health) 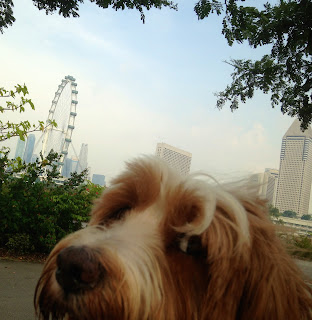 Finally, I'm feeling on the mend and although still rather tired I am getting my energy levels back (although falling to sleep during my facial today was rather embarrassing :-Oooops!!)  Finish up this course of antibiotics and I shall be 100% back to normal (as normal as can be hoped anyways :-))

*the air quality does seem particularly bad right now...I see haze resting over the city and there's also a strong smell of smoke/fire in the air.  Playing havoc with my asthma, tight chest and rather sore eyes too :-(  Not a great day to be outdoors.  I know Shanghai and Beijing have it so much worse and I totally feel for those who live out there.


with kisses 'n' smiles from Clare Victoria Eastwood at 10:39 No comments: Links to this post